What is Bitcoin Roulette?

The only difference between Bitcoin roulette and regular roulette is that Bitcoin roulette is played with cryptocurrency. Some online casinos now offer deposits and withdrawals in Bitcoin and other cryptocurrencies. There you can play live roulette with real dealers and there are various roulette variations such as Lightning Roulette. Deposits and withdrawals are processed in Bitcoin, otherwise everything is identical to the normal roulette game.

How to play Roulette with Bitcoin?

If you have a Bitcoin wallet, you can choose a site from the list above and deposit bitcoins there. If you do not yet have a Bitcoin wallet, you first need one. Before you buy or send bitcoins, you should take a closer look at the underlying technology. This can be very complicated and time consuming for a beginner. However, it is necessary to understand the Bitcoin technology to be able to use it safely.

What types of Bitcoin Roulette are there?

What are the advantages of Bitcoin Roulette?

One advantage of Bitcoin is that no sensitive personal data is given to the casino when you make a payment. Cryptocurrencies also offer low transaction fees and fast transaction processing.

What are the disadvantages of Bitcoin Roulette?

Paying with bitcoins in online casinos also has major disadvantages. The choice of available online casinos is much smaller if you want to limit yourself to Bitcoin payments. Moreover, cryptocurrencies such as Bitcoin are very volatile, i.e. they are subject to considerable exchange rate fluctuations. Blockchain technology is still quite new and partly very complicated. This makes it more difficult for Bitcoin novices to get started.

Roulette is a gambling game that has been popular throughout the world for centuries. In today's modern times, the game is still very popular and fortunately it can also be played with bitcoins. Before you choose a roulette game, you should know about the different roulette variants, because the fees or the house edge differ in some cases considerably.

In live roulette, the roulette wheel is served by a real roulette dealer as in the normal offline casino. The fees here are 2.7% as in the real casino. European roulette is offered in almost every Bitcoin live casino. Just pick a casino from the list. 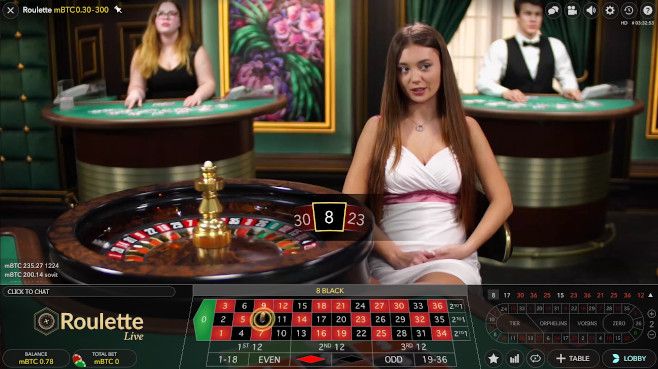 In addition to the traditional variants of the roulette game described above, there are also modern action-packed roulette variants. I would like to introduce two particularly popular variants here: Lightning Roulette and Dream Catcher. 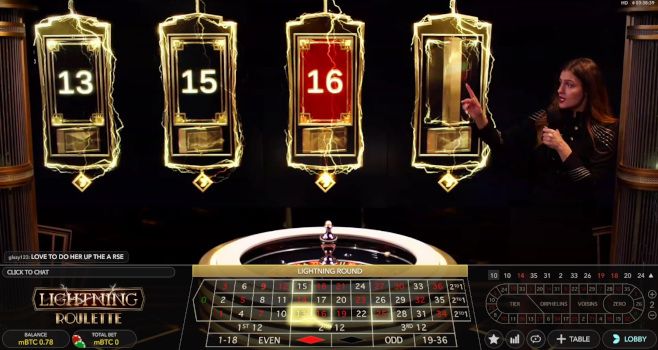 Lightning Roulette: Drawing of the lucky numbers. In this case, four numbers are drawn.

At the beginning of each round, one to five lucky numbers will be drawn, increasing payouts significantly (to between 50x and 500x). All other numbers pay only 30x, in contrast to the 35x for normal roulette. 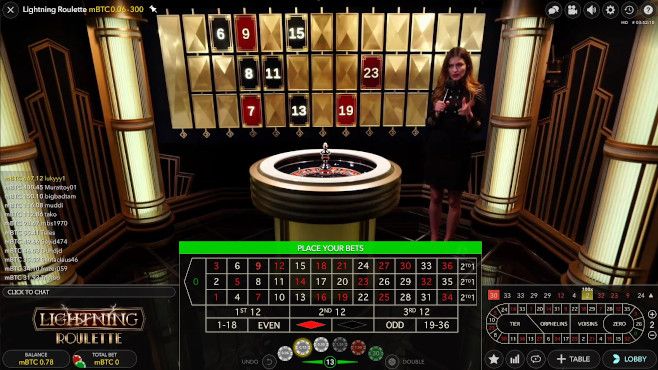 A Bitcoin version of Lightning Roulette is also available on Bitcasino. The minimum bet is very low here at 0.04 mBTC, so you can easily play with small bets.

Dream Catcher is a roulette-related game. It offers a much higher volatility and therefore more excitement than classic roulette, at least that's what many players think. 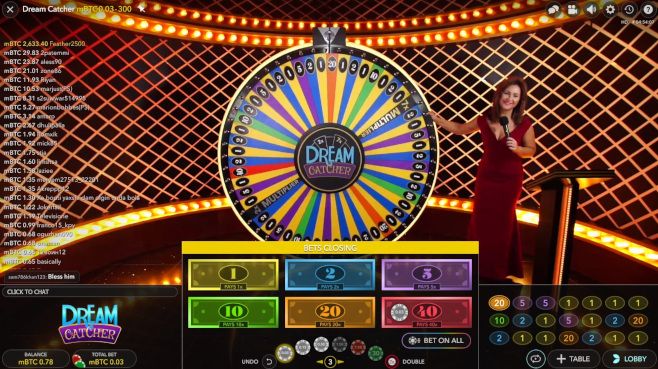 At the beginning of each round you can bet any amount on one or more numbers. The numbers appear in a different frequency on the money wheel and have correspondingly different payout rates. The 40, for example, only exists once on the wheel and the payout is 40 times the bet.

Dream Catcher: The wheel lands on the 7x multiplier.

The special attraction of the game lies in the multipliers "2x" and "7x". These can occur several times in a row and multiply the total profit several times. For example, if the wheel stops at "7x" two times in a row, the next round's win is multiplied by 49.

The roulette-like game Dream Catcher is offered in many different online casinos and can also be played with Bitcoin bets, for example on Bitcasino. On this site, the minimum bet is 0.02 mBTC, the maximum bet 200 mBTC. The site is therefore suitable for both small and large bets.