The slot provider Play'n GO is known for online casino slots with high volatility. Although the provider has been around for many years, Play'n GO is best known for its Book of Ra clone Book of Dead, which will be presented in the following. 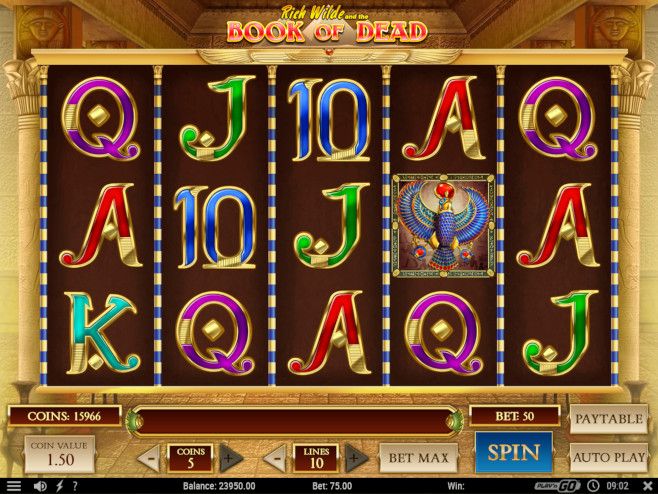 The Book of Dead slot can also be played with bitcoins.

It is possible to win up to 5000 times the bet in the base game, but the really big winnings usually come, as with many other slots, in the bonus games. You need at least three scatter symbols to trigger the bonus game. In this slot machine, the scatter symbols are books that are wild at the same time. With three or more books, the player gets ten exciting free spins. 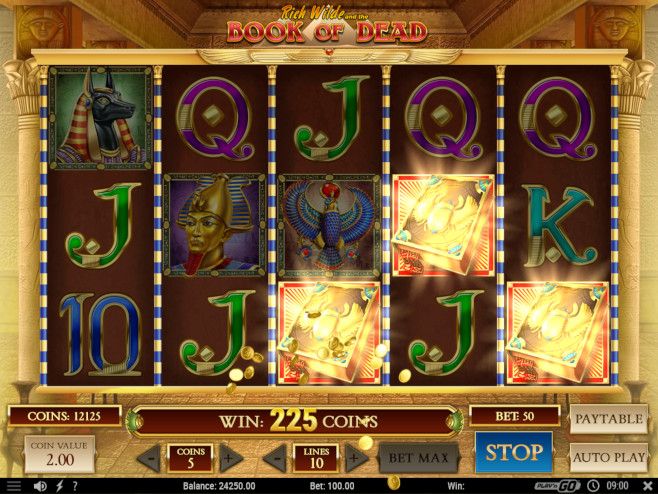 The bonus feature is triggered by at least three books.

At the beginning of the bonus, a bonus symbol is selected, which expands during the bonus and can thus generate enormous profits. The better the symbol, the rarer it appears in the bonus games. According to the provider, the slot payout (Return to Player, RTP) is an acceptable 96.21%, so the house edge is 3.79%.

At some online casinos you can also play the slot with bitcoins. All casinos in the Bitcoin Slots List above that offer Play'n GO games also have the Book of Dead slot machine.

The Reactoonz slot is more complex than many others, so you'll learn about the different elements of the game as you play. Due to the relatively high volatility and the excellent animations of the cute little alien creatures, the slot is extremely popular among online gamblers. 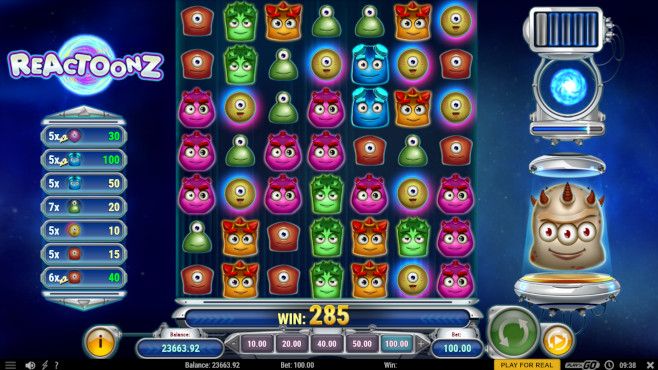 The Reactoonz slot can now be played with bitcoins as well.

Unlike most other slots, Reactoonz has no paylines. To get a win, you need at least five matching symbols that are touching, horizontally or vertically. The amount of the win depends on the type and number of symbols. These symbols will be removed after the win and filled with other random symbols, allowing further winnings to be made.

The quantum leap meter is an important part of the game. It charges up when winning and can trigger the four quantum features and the Gargantoon feature. 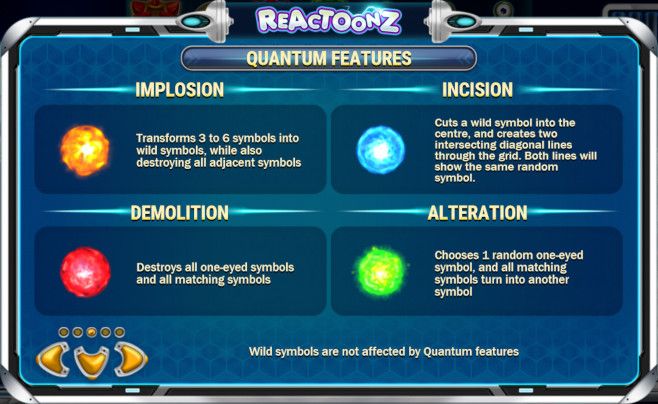 Here the four quantum features of the Reactoonz slot are explained.

When the quantum leap meter is fully charged for the fifth time, the Gargantoon feature is activated. The Gargatoon is wild and appears as a 3x3 sized monster, which usually promises high wins. In addition to those described here, the slot offers many other features that you will discover as you play.

Big Time Gaming invented the concept of Megaways and now most of their slots are Megaways slots. A normal slot machine with five reels and three symbols per reel will have a total of 243 paylines if all possible lines count. Megaways slots no longer have three symbols per reel, but a random number that changes with each spin. This can result in a very high number of possible paylines. The volatility of all Big Time Gaming slots is very high. The provider is mainly known for the Bonanza slot, which I would like to introduce in the following.

The extremely popular and at the same time hated Bonanza slot is known for its exciting bonus games, which have a very huge winning potential. Therefore it is accordingly difficult to trigger the bonus games. You will need the four golden letters "G", "O", "L" and "D" and if possible the "+5" scatter for five extra bonus games. Free games have a multiplier that increases with every win and can result in extremely high winnings. 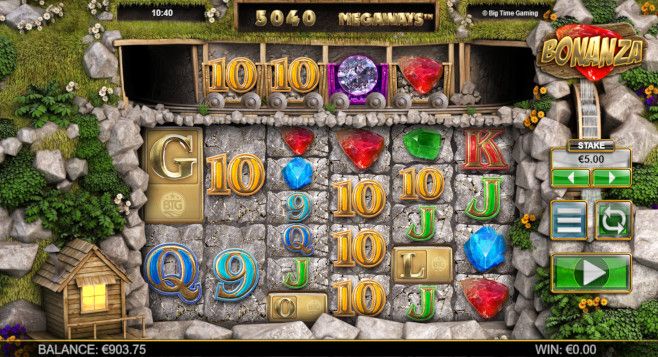 Picture of the Bonanza slot. A golden "D" would have been needed here to trigger free spins.

A new idea of Big Time Gaming is also the cart symbols above the normal reels. The carts contain four additional symbols that provide additional paylines. The slot is offered by many online casinos and it can also be played with bitcoins, for example on 7BitCasino.

Who wants to be a Millionaire Slot

The slightly newer Who wants to be a Millionaire slot works pretty much like the Bonanza slot. As with the Bonanza slot there are Megaways and additional cart symbols. The bonus games are triggered by at least three Who wants to be a Millionaire symbols. The main difference is the pre-bonus game, in which the number of bonus games to be played is first determined. The slot is visually based on the original TV show, but no quiz questions need to be answered. 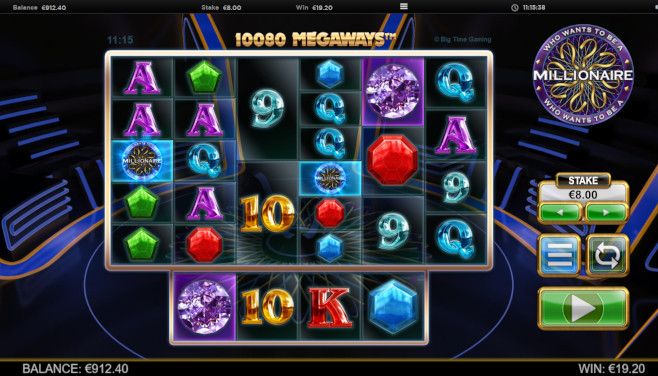 Here is an image of the "Who wants to be a Millionaire" slot with over 10000 Megaways.

In the pre-bonus game, one of the three lifelines is selected at random to help the player make a decision. Unfortunately, the audience and the Phone-A-Friend lifeline are often wrong. The fifty-fifty lifeline simply eliminates two of the four possible answers. If the "10 Spins" limit is reached, the player has ten bonus games for sure, the same applies to the "20 Spins" limit. Thus a maximum of 50 Free Spins can be achieved. In the bonus games, there is a multiplier that increases with every win, as with the Bonanza slot.

At some Bitcoin casinos the Who wants to be a Millionaire slot and other Big Time Gaming slots can also be played with Bitcoin bets. Just choose a suitable online casino from the list above.

A slot provider that has been known for some time is Microgaming respectively Quickfire. This provider is best known for its 243-way slots, where all possible paylines count. Below I will explain some of these slots in more detail.

By now, Immortal Romance is one of Microgaming's most popular slots. To trigger the bonus, at least three scatters are required at any position. There are a total of four different bonuses, of which the player can choose one. However, three of these bonuses must first be unlocked before they can be selected. 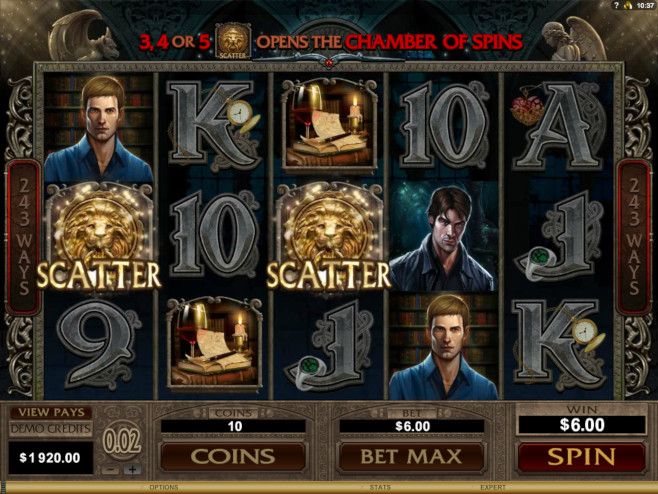 Image of the Immortal Romance slot. One scatter symbol is missing here to trigger free spins.

Beside the normal bonus games there is the Wild Desire bonus, which occurs randomly in the base game and can lead to big wins. By the way, the slot was built with exactly the same slot mechanism as the Thunderstruck II slot. To play the slot with bitcoins, you can simply choose a page from the list above. It only has to offer Microgaming slots, then it also has the Immortal Romance slot.

Terminator 2 is now an older Microgaming slot, but it is still very popular and offered in many online casinos. It is a typical 243-way slot, but it unlocks additional paylines in the bonus round. In the bonus games the slot will be expanded to 1024 Ways and the T-1000 symbol will become practically wild, it may turn into any premium symbol. The free spins are triggered by three or more scatter symbols. 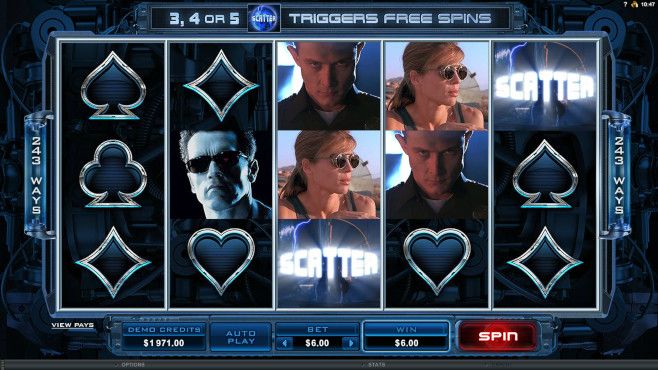 This is a picture of the Terminator 2 slot during the base game.

An additional feature is the randomly triggered "T-800 vision", which pays a bonus for each premium symbol of the current spin. During the "T-800 vision" a single scatter symbol is sufficient to trigger free spins. Especially attractive about this slot is the so-called "hot mode" in the bonus games, where extremely high winnings are possible. Premium and T-1000 symbols are much more common in "hot mode" than in normal free spins. Wins of 1000x and more are not uncommon here. The "hot mode" is triggered randomly at about every 100th bonus and is recognizable by flame animations and a changed orange-red color.

The Terminator 2 slot uses exactly the same slot mechanics as the Happy Holidays slot, only the appearance of the two slots is different. Both slots and other Microgaming slots such as Thunderstruck and the Playboy slot are offered in various online casinos as Bitcoin slots, see the list at the top.

One of the best-known NetEnt slots is the Western themed slot Dead or Alive. With nine paylines, the slot has significantly less than most other slots, but this has no negative impact on the game experience. The bonus feature is triggered by three or more scatter symbols. The bonus is a classic sticky wild bonus, in which all appearing wild symbols remain in place for all twelve free spins. This can lead to enormously high winnings, especially if a complete wild line is achieved. In addition, all wins are doubled in the bonus games. 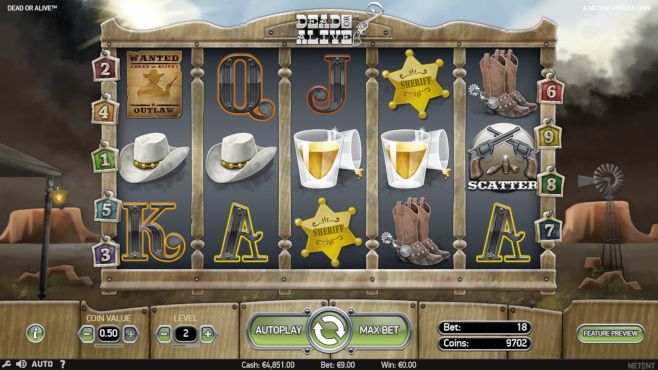 NetEnt's Dead or Alive slot machine can now also be played with Bitcoin.

Meanwhile, the official successor slot Dead or Alive 2 has already been released. The Dead or Alive slots and other NetEnt slots such as Starburst, Wonky Wabbits and Space Wars can be played with bitcoins at the crypto currency casino site Oshi.

The Chilli Heat slot by Pragmatic Play is a slot with five reels and three symbols each. According to the provider, the slot has a medium volatility. To get the free spin feature, you need three sun symbols on reels two, three and four. This triggers eight free spins with only premium, wild and money symbols. 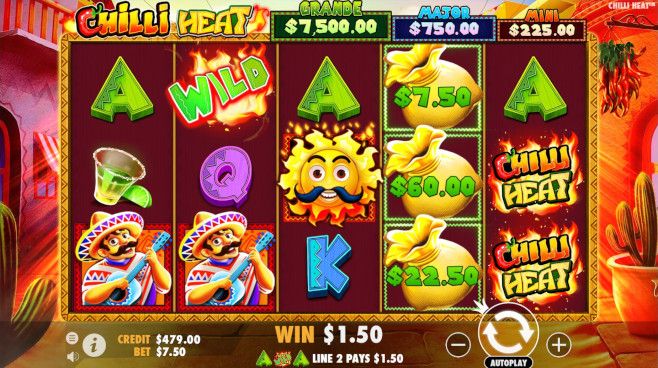 This is an image of the Chilli Heat slot by Pragmatic Play.

The slot also has three different jackpots, which do not increase progressively, but have fixed winnings. The Grande Jackpot pays a thousand times the bet, the Major Jackpot a hundred times and the Mini Jackpot thirty times the bet.

How to win a Chilli Heat Jackpot?

Six or more money symbols trigger the "Money Respin Feature". Each money bag contains any amount of money, the Mini Jackpot or the Major Jackpot. At the beginning of the "Money Respin Feature" you have three respins. If at least one more money bag appears with one of the three respins, the number of available respins is reset to three. If there are money symbols on all 15 positions, you will win the Grande Jackpot.

If you would like to play the slot with Bitcoin, there are a few sites to do this. Simply select a suitable Bitcoin casino from the list above. Other Pragmatic Play slots can also be played there with bitcoins. These include the Santa slot with low volatility and the Great Rhino slot with medium volatility. Furthermore, there are also slots with extremely high volatility such as Madame Destiny and Peking Luck. The Peking Luck slot has an incredible maximum win of 180000x.

Push Gaming is a great creator of HTML5 slot machines and other gambling games. Most Push Gaming slots are very volatile and have very high maximum winnings. With Jammin' Jars we want to introduce one of these slots.

The Jammin' Jars slot reminds at least at first sight of the game design of the Play'n GO slot Reactoonz, but differs relatively clearly. The slot has eight rows and eight columns into which fruit symbols are dropped from above at each spin. A win requires at least five matching symbols that are touching. For each win, the winning symbols are eliminated and replaced by random symbols, with additional winnings possible. Jar symbols are wild and increase their multiplier with every win. At least three jar symbols are required to trigger the bonus games. In six free spins, the jars and their multipliers are taken to the next round. With a little luck, the jars in the bonus games are close together, which can lead to extremely high winnings. 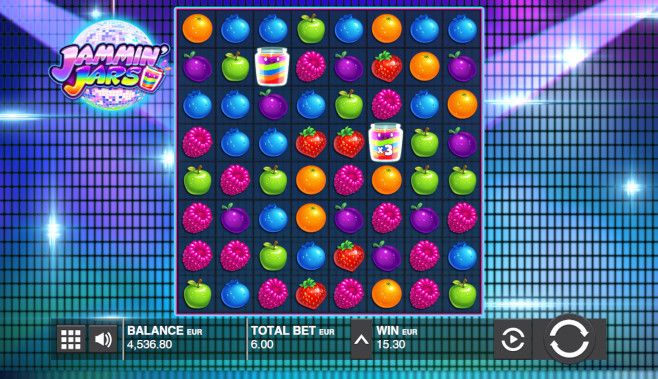 This is the Jammin' Jars slot. On this image one jar symbol is missing to trigger the bonus feature.

If you want to play the slot with bitcoins, there are several possibilities. Just have a look at the list above and choose a site that supports bitcoins. Besides Jammin' Jars there are also other popular Push Gaming slots such as Fat Rabbit and Wild Swarm.